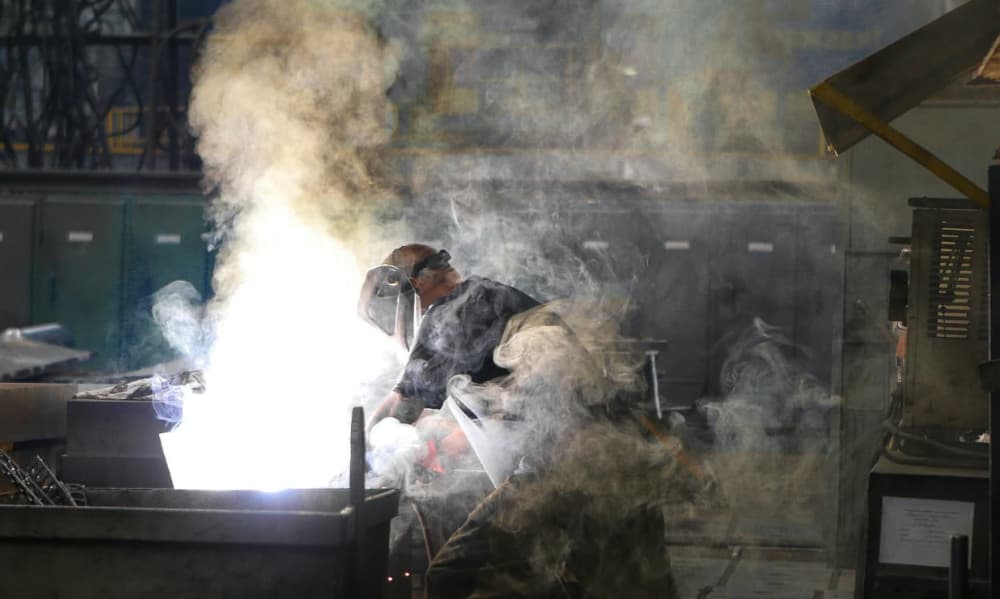 Coming on the heels of record job losses and economic hardship as a result of the COVID-19 pandemic, the idea of organizations struggling to fill open positions may seem farfetched.  It’s not. In the coming years, across industries, the gap between current workforce skills and the skills required will continue to grow. The problem is the same whether you’re a policymaker, corporate executive, or training provider – the U.S. workforce is unprepared to fill and address future positions and challenges.

In this blog – we look at why, and outline three strategies to build a future-ready workforce.

The challenges facing the workforce

Let’s start by looking at three of the biggest challenges the U.S. workforce is facing.

First - Workers who have been furloughed during the pandemic come from a wide spectrum of industries, educational levels, and salaries. Current data shows while highly skilled office workers are getting back on the job, mid and lower skilled workers are slower to recover, will be earning less, and employed in a lower-skill position than the one they just lost. According to the Congressional Budget Office the underemployment rate is expected to peak at 29.2% at some point this quarter

Second - Mid and late career workers are much less likely to pursue new skills if they anticipate they will take years to acquire.

Third - We already have millions of unfilled positions across tech, healthcare, manufacturing, and countless other industries. This number is not going to go down. By 2028, the skills gap is expected to leave 2.4 million jobs unfilled, with an economic impact of $454 billion dollars. 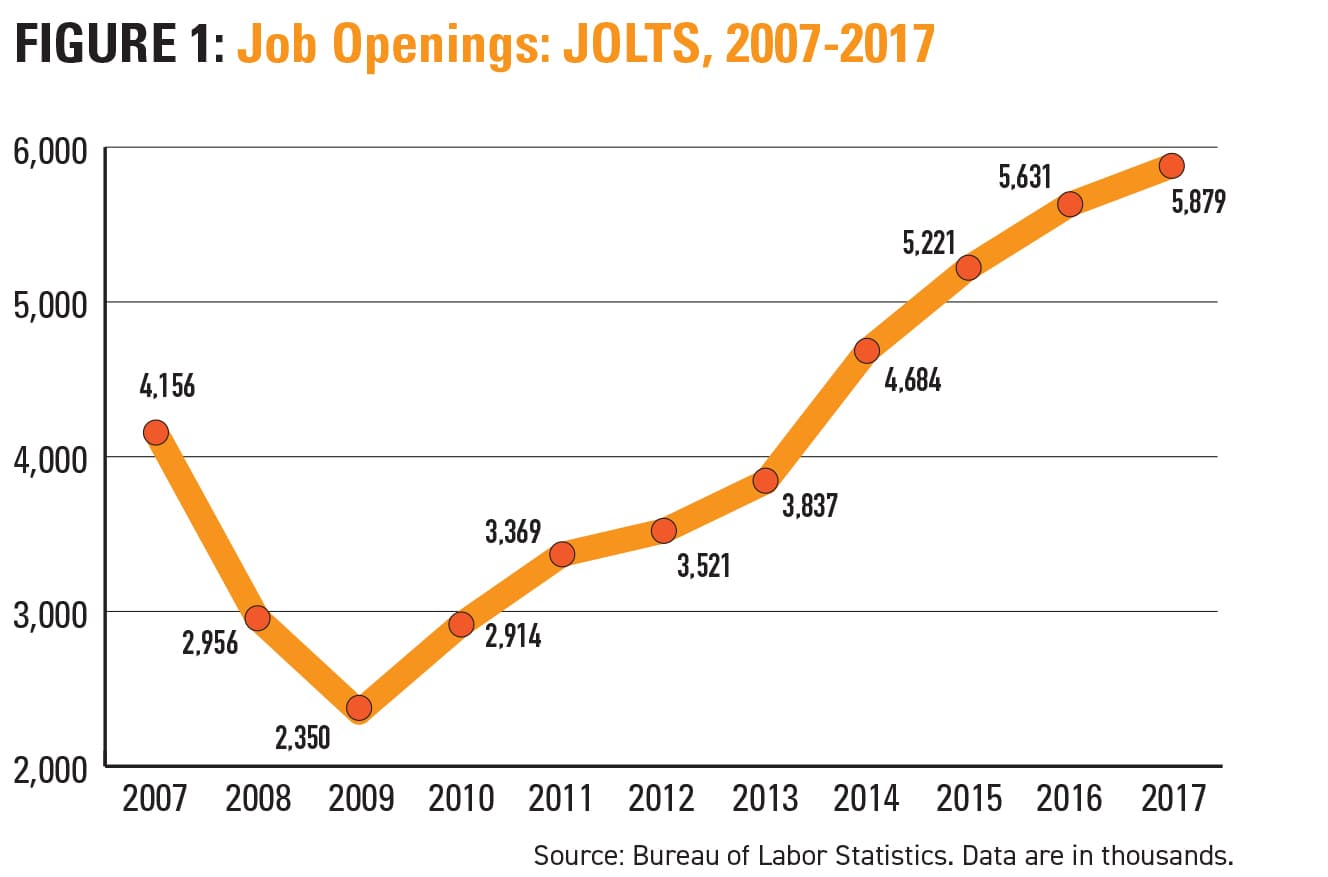 This graph, from NACE showcases the growth of total job openings year over year.

So – what do these challenges mean for the future of work?

The most immediate and impactful consequences come in the form of a reduced economic ceiling and the disenfranchisement of millions of workers. The impact goes deep - 60% of organizations says external skills shortages will hamper their ability to meet strategic goals, 55% of CEOs report their companies aren’t able to adequately innovate due to skills gaps.

So how do address those problems and build a future-ready workforce? Here's how:

The skills gap refers to the mismatch between the skills that employers are looking for in employees, and the skills those employees possess.  Employerss are finding it increasingly challenging to fill positions and this is not a temporary problem. Rapid reskilling and skill shifts to accommodate new technologies will be the rule, not the exception, as the pace of technology development quickens.

The way we are working is changing. Seismic shifts in the way we go about our lives will change the skills needed for future jobs. Nothing has made that clearer than the sudden shift to remote work during the pandemic.  Addressing the skills gap can’t be buiinclude make provisions that address future problems and put us in a position for long-term success.  All organizations, workforce programs, and academic institutions need to adapt to these changes together so  the infrastructure available to workers is effective in preparing them for the constantly changing employment landscape.

Traditional post-secondary degrees are valuable representations of skill and knowledge, but during a time characterized by rapid change – filling the millions of future positions will require more flexible, less time-consuming options. But what are the alternatives?

We need to transition away from time-bound degrees and programs that operate on specific timelines that prevent workers from gaining skills at their own pace, on their own time and on the job.  Developing skills, competencies, and acquiring micro-credentials that are not constrained by specific time periods and availability expediates the process and makes them accessible for workers with limited  free time. Not only are these alternatives better for workers in the short term – they often are built on a stackable model of job and industry specific knowledge that can grow over time.

Apprenticeships bridge the gap between off-site programs and on-the-job training, reducing the time it takes to get workers where they’re the most needed. Apprenticeships aren’t just for the traditional trades  – many Industry 4.0, healthcare, IT, and other positions require skills so new and new model is required. The most effective – and sometimes the only solution, is to learn alongside those already performing that role. Apprenticeships should be at the forefront of addressing immediate talent gaps across all industries. On-the-job training is the fastest and often the most efficient means of getting workers trained and placed in roles where there is a large gap between available workers and jobs. If you want to learn more about how technology is shaping the next generation of apprenticeships – read more here.

Technology is integral to addressing the skills gap, enabling rapid up- and re-skilling, and building the infrastructure that will connect workers to in-demand careers. Whether you’re advocating for policy change or building more effective skill and competency management practices within your organization, technology must be a part of any plan to building a future-ready workforce - here's how:

One of the strongest opportunities for technology in shaping the future of work is facilitating connections. There are thousands of disparate systems and programs across the country, all with the goal of getting workers on pathways to in-demand careers, but very few span the entire job-seeking process. Programs need to be built with technology that is informed by current demand so that resources can be efficiently and effectively used end-to-end.

Many skills-testing startups have emerged in recent years, and for good reason – current tools aren’t designed to address the future of work. Traditional skills assessments and time-gated courses aren’t just outdated – they’re holding workers back. Whether it’s on-the-job skills assessments or HR systems built to enable reskilling and upskilling within organizations – the tools of the future are being built to address the needs of the future workforce. In fact, we’ve got something exciting to announce in the coming months – so watch this space.

With 20+ years of experience, fivestar* develops custom web and software solutions that centralize workflows, optimize processes, and enable decision-making through real-time data and business intelligence for clients in a wide range of industries. fivestar* is heavily involved in Industry 4.0 workforce development and education initiatives that help prepare individuals and organizations for the future of work through the intelligent use of technology. Working with regional and national partners, fivestar* has developed solutions that connect students, workers, adult learners, and veterans with re-skilling and career pathway opportunities.

Interested in working with us on a project? Let's chat.

About the Author: Cameron Avrigean

Cameron Avrigean is a Marketing Coordinator at fivestar*. Cameron is an analytics fanatic with a penchant for copywriting and social media. He works with the marketing team to create engaging content, and is looking for the next big thing. Cameron holds a B.S. in Business Management from Point Park University.

About the Author: Lou Camerlengo

As fivestar*s President, Lou seems to effortlessly drive company performance and lead business development and client retention efforts. He is involved in higher education and workforce projects and serves on multiple non-profit boards.

More From the fivestar* Blog:

Legacy systems are great – unless you rely on them for critical business operations.

Looking to solve a challenge?

Tell us about your project